Lighting can be visually distinctive, so it is not surprising that various service businesses have registered the exterior lighting of there premises as a services.

U.S. Reg. No. 3697306 protects “green lighting formed by four light fixtures placed in a symmetrical fashion near the entryway of the building” for hotel services — Holiday Inn.

U.S. Reg. No.3697305 protects “blue lighting formed by four light fixtures placed in a symmetrical fashion near the entryway of the building” for hotel services — Holiday Inn Express.

U.S. Reg. No. 4594685 covers the three-dimensional configuration of a sidewalk canopy with lighting that creates “a red glowing effect” for hotel and motel services: 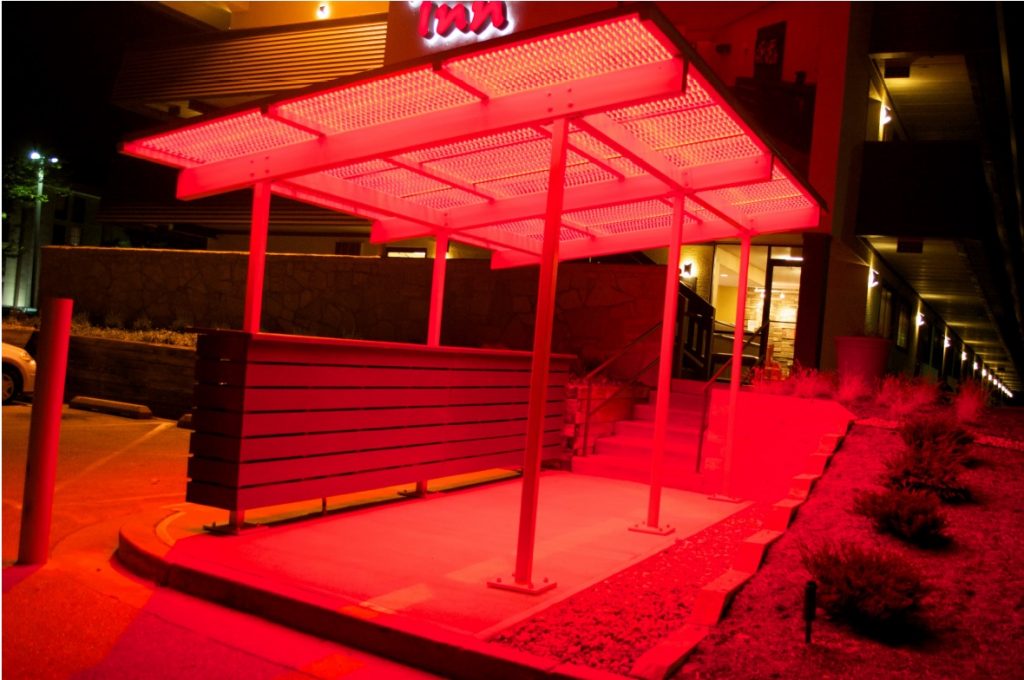 Representations of gestures can be trademarks.  For example Facebook’s Application No. 85020073 covers a depiction of a thumbs up gesture followed with the word “LIKE” in a rectangle:

However, Reg. No. 4735632 arguably covers a gesture itself (“The mark consists of a thumbs up hand gesture with the thumb having a face wearing a ninja mask.”):

If 15 USC 1052(a)’s prohibition against the registration of “immoral, scandalous, or disparaging marks” is affirmed as unconstitutional, one has to wonder what kinds of “gestures” might be registered as trademarks and service marks.

An interesting phenomenon is the use of trademarks to own current events.  Every major event seems to be followed by a series of trademarks applications by those who seek to claim ownership of history, or at least the tchotchkes of history.

It wasn’t surprising, then, that Donald Trump’s surprising run for the presidency, spawned a number of copycats trying to own a piece of the event.  Donald Trump filed his first application on MAKE AMERICAN GREAT on November 19, 2012, just two weeks after the previous Republican nominee, Mitt Romney, lost to Barack Obama.

The trademark register is an overlooked resource tool for seeing what has caught America’s attention.  Whatever it is, someone will make a T-shirt or bumper sticker, and try to own it, by filing a trademark application.  Own a piece of history, just $225 per class.